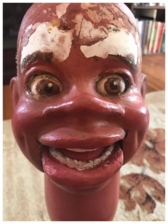 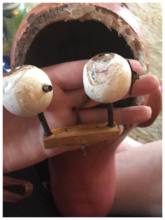 We also did a rebuild on a ventriloquist puppet for Cleveland performer, Nate Puppets. This project included creating a new head stick, repairing the mouth mechanism, sanding down and repairing the eyes and eye mechanism, repair of the head, sanding and repainting, and clear coating the head. A new wig was added, cut and styled. 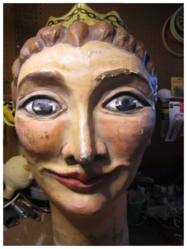 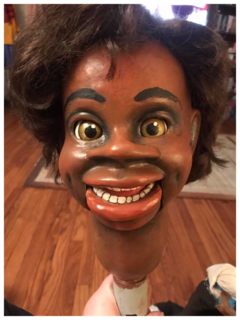 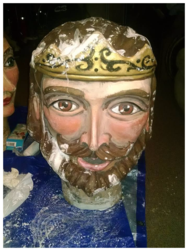 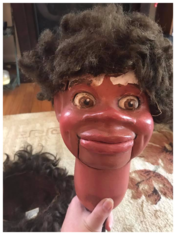 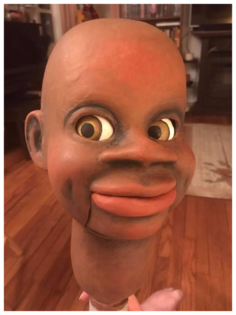 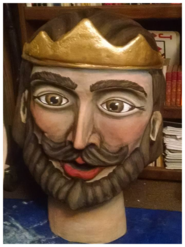 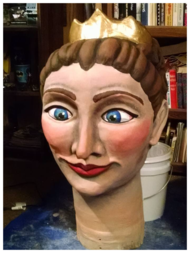 Some of the other restoration projects that we have done in the last couple of years include the complete restoration of giant parade puppets for the Colorado Renaissance Festival and Pittsburgh Renaissance Festival. This project took five months to complete and included reshaping the heads, that had been crushes, patching and filling holes in the heads, sanding, repainting and clear coating the heads. We also attached PVC rods to the top of each head, so that they could be attached to the body of each puppet, and created neck plates to fill the openings at the base of each neck. This helped to stabilize the necks rods and to keep rodents from entering the heads during the off season. All of the straps in the harness were cleaned and the padding was replaced, due to black mold. Every piece of tape (hundreds of them) were removed and replaced. Costumes were cleaned, deodorized and repaired. 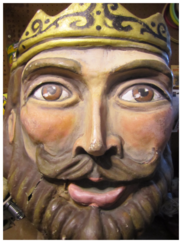 When we took possession of the puppets and staging for "The Snow Queen", everything was in pretty bad shape. The show was originally produced in the 1980's and had been touring every year since. There were a lot of cracks, chips and breaks in the puppet heads and hands. Many of the costumes were torn, stained or just plain worn through. We thought that all of the set pieces were lost. However, after a few phone calls, two trips to Westfield, New York and another investment, we were able to secure the pieces that still survived. The set is in really bad shape and needs an extraordinary amount of work.

As part of the ongoing work to create, repair and restore the puppets and staging, we will be posting photos, videos and documentation of the project here.​